They are vision-blocking and anti-glare and semi-transparent window films applied from inside. They are top selling window films for windows, doctor’s offices, bathrooms or storage rooms. They are matt white window films with milky-white appearance. They can be sold as the pieces cut in the exact sizes upon your request.
Sonnenschutz
28%
Lichtdurchlass
69%
Blendreduzierung
22%
Content 0.76
From €15.90 *
Details
Folienmuster

They are (semi-transparent), matt and white; and are suitable to be applied from inside or outside. They look like milky-white satin glasses. They are matt white window films with Lexan appearance and vision-blocking feature. It is impossible to see inside or outside at nights. They are milky-white satin window films with sanded effect for bathrooms, storage rooms, doctor’s offices etc.
Sonnenschutz
30%
Lichtdurchlass
59%
Blendreduzierung
40%
Content 0.76
From €16.90 *
Details
Folienmuster

They are films as bands, 45 mm in width with milky-white appearance. Those milky-white window films have anti-glare and vision-blocking features with milky-white window appearance. It is possible to see inside or outside if you are really close to the window; however, it is not possible to see inside after a specific distance. They are window films ideal for bathrooms, doctors’ offices or storage rooms.
Sonnenschutz
18%
Lichtdurchlass
83%
Blendreduzierung
37%
Content 1.52
From €21.95 *
Details
Folienmuster

They are films as squares, approximately 45 x 45 mm in diameter with milky-white appearance. Those square milky-white window films provide anti-glare and vision-blocking functions. It is possible to see inside or outside if you are really close to the window; however, it is not possible to see inside after a specific distance. They are window films ideal for bathrooms or doctors’ offices.
Sonnenschutz
16%
Lichtdurchlass
85%
Blendreduzierung
16%
Content 1.52
From €21.95 *
Details
Folienmuster

They are films as stripes, approximately 10 mm in width with milky-white appearance. Those milky-white stripe window films provide vision-blocking and anti-glare functions. It is possible to see inside or outside if you are really close to the window; however, it is not possible to see inside after a specific distance. They are window films ideal for doctors’ offices or bathrooms.
Sonnenschutz
17%
Lichtdurchlass
87%
Blendreduzierung
21%
Content 1.52
From €21.95 *
Details
Folienmuster

They are films as dots, approximately 3 mm Ø with milky-white appearance. Those milky-white dot window films provide anti-glare and vision-blocking functions. It is possible to see inside or outside if you are really close to the window; however, it is not possible to see inside after a specific distance. They are window films ideal for bathrooms and doctors’ offices.
Sonnenschutz
12%
Lichtdurchlass
92%
Blendreduzierung
10%
Content 1.52
From €21.95 *
Details
Folienmuster

Due to our broad range of window films in the look of frosted glass, that can be bought online from us, there are different ways to prevent insight and to give interiors a more modern look at the same time. Translucent window film can be installed on almost any interior glass surface and is an affordable alternative to costly sandblasted glass, colored glass or etched glass. At the same time, the frosted glass look provides your rooms with a modern touch. There are many different frosted glass options that ensure your discretion and protect with concepts like a sandblast effect. The open and unimpaired room climate remains with frosted glass film, but curious glimpses into intimate areas are prevented.

Our window film in frosted glass optic can be installed cleanly, quickly and easily on any smooth glass - for example, on glass partitions in foyers, sanitary rooms or meeting rooms for individual discretion in private areas. Each interior benefits from our wide range of decorative patterns and film designs help to maintain privacy. For example, due to the unique frosted glass structure, the design of coated panes can be achieved inexpensively for a small amount of Euro. Another application of the films with high light transmission is the use in sanitary or public facilities. Unlike classic etched glass and sandblasted glass, the film in frosted glass optic can be removed again if necessary without leaving any residues, e.g. when moving out or changing the application. Applicable for both private rooms and rooms used for business purposes, frosted glass films are very popular because they are translucent. Offices with glass walls look futuristic, modern, opaque and particularly open. However, the concentration of employees quickly suffers because they can be observed through the glass walls at any time. Business owners reduce this effect by having frosted glass films applied to the panes. A half-height application already gains some privacy, and the working atmosphere is noticeably enhanced. Various designs allow you to use a frosted glass film that not only serves its purpose, but also brings visual added value to your office. Milky glass film can be used especially well to screen glass walls of conference rooms as running meters of film. The architecture and the impression created by it remain untouched by a professional cut, but if you apply the frosted glass film slightly above seat head height, the conference subjects are protected from prying eyes. And at the same time they are not distracted from what is happening around them. So by using frosted glass film, you can easily improve the productivity of your meetings. Interior and exterior frosted window films are also a good investment in your employees' working morale.

Our frosted glass film and window film is obscure and opaque, but at the same time light-transparent and translucent. Also available as so-called frosted glass film with milky white decorative patterns. For example, "Matt Stripes" with a matte white stripe pattern or "Matt Dots Small" with matte white dots. Window film as frosted glass film can always be partially installed on any window, glass or pane. Unlike solar control film, where partial surface application of the window film is not recommended due to temperature and stress changes in the glass, there is a risk of breakage for glass if installed partially. This however does not apply to frosted glass film, where the space between the glass could not heat up, even with modern double glazing and triple glazing windows. Because there is no strong temperature change, there is no thermal stress change caused by this window film or privacy film. So there is no risk of glass breakage. Furthermore, frosted glass film is also available for exterior installation. Benefit from this practical product and our low shipping costs. You can buy our frosted glass films quickly and easily online. Be inspired by our large selection of different films.

Advantages of the frosted glass film as a summary: 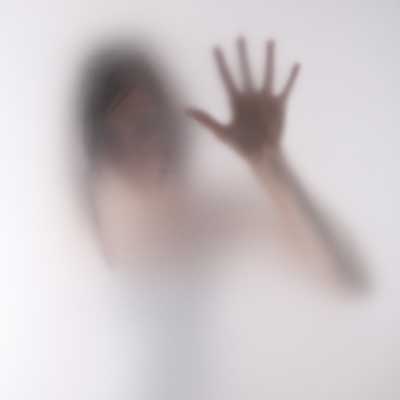 If you would like frosted glass films for your office or private rooms, do not hesitate to ask our consulting hotline staff for a comprehensive and individual advice. Many years of experience make us your competent partner for frosted glass films and other window films. You will benefit from the following services:

Milky-white window film is translucent (light-transmissive) and protects day and night from onlookers and direct solar rediation. Hence, the film is very often used in discretionary areas such as bathroom, doctor's office or storage rooms.

After removing the protective foil, spray the window and film with a assembly concentrate/water mixture, then position the film on the window and after that, scrape out the moisture again.

In order to remove milky-white window film, heat the film with a hair-dryer. Then pull the film from one of its corners. You can pull it longitudinally easily. After the old film is removed, spray Ajax window cleaner on the windows in order to remove the residuaries of the adhesive material. The remaining residuaries can also be removed with the help of a shaving razor or a glass scraper after a short time.

We use cookies. Some of them are technically necessary (for example for the shopping cart), others help us improve our website and to offer you a better user experience. Data Protection Notification Imprint

You accept the following cookies by clicking on Accept all: