They are two-way mirror films with silver structure. It is almost impossible to see inside in daytime; however, they allow you to see outside well.

Two-way mirror films protect you from undesirable looks and allow you to see outside at the same time. 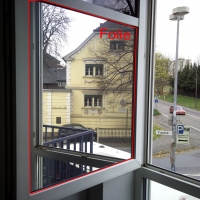 Besides, it is also suggested not to apply mirror films or two-way mirror films as pieces. The glasses can warm up. Different temperatures can cause your windows to get broken as a result of the tension changes after application as it happens when the gap between the glasses gets warmer. Of course, the window films which do not reflect sunlights, glare like a mirror or absorb them strongly are not affected from that. Please be well informed about the several films applied from inside and outside before buying them and decide whether two-way mirror films are suitable choice for you.

Problem – Protecting employees from undesirable looks from outside

Having offices visible from outside especially in the buildings in crowded places can cause your employers to be watched all day long. If there is nothing to prevent vision, it can cause a permanent stress factor for them. The employers who want to protect their employees need to find an opportunity to prevent undesirable looks without blocking the outside vision. And the dark blinds do not provide permanent solutions to prevent them to see outside.

Those window films with mirror effect can be applied on the smooth glass surfaces quickly and finely if you follow the procedures. They can be applied on the windows in observation places, officess or private places for privacy. Similarly, conference halls can be designed to enable the participants not to be uncomfortable by applying their windows two-way mirror films. The privacy-protecting films can function even at nights and for the lightened places after being applied successfully. They can also be used in medical areas or public institutions. Those window films as heat-insulation or sun-blocking films can be removed without leaving residuals when you are moving out or changing them.

Two-way mirror films not only prevent the outside looks, they also reduce the heat effectively. The ambient temperature is lowered effectively since UV-ray cannot get through the rooms and the sun-rays are reflected. You can protect your employees from undesirable looks with them like you can with blinds or vision-blocking films. They can also enable you to save money in summer since they provide an opitimal temperature in the rooms and you do not need to use an air-conditioning system. Thus, you can save money. Besides, you and your employees utilize from the applied two-way mirror films.

Of course two-way mirror films can be used as films with silver appearance or privacy protecting films for private places. In the places where apartment buildings close to each other due to crowded population you face privacy problems. You need to either watched by your neighbours whole day frequently or close your blinds. However, when you close your blinds, you not only block the looks of your neighbours, but also the beneficial sunlights. Two-way mirror films can solve this problem easily. You can enjoy looking outside freely and you can also be protected from undesirable looks.

You can buy our mirror films with UV-blocking feature easily online and they can be delivered to your house or office directly.

Two-way mirror films allow you to see outside while they prevent the outside looks. Besides, they provide a modern appearance for your windows. Window films with strong mirror effect can be applied on the flat glass surfaces from outside and they can be an alternative for mirror windows which are really expensive. There are several ways to protect and guarantee your privacy without others watching. Result: you can prevent the outside looks to the private places without affecting the clear and refreshing atmosphere. Those vision-blocking films provide you a better quality of life. The ones who want to act freely and feel comfortable in their offices or private places should not ignore the advantages of mirror films. Additional advantages such as vision-blocking and heat-insulation function of window films increase the importance of window films.

The advantages of two-way mirror films in sum:

❓ What is a two-way mirror film?

A two-way mirror film is an extremely strong reflecting mirror film for outside installation, which can provide privacy as long as the room is darker than the outside. Privacy protection for lighted rooms can be achieved by illuminating the two-way mirror film and by dimming the room light as much as possible.

🕶️ What is the difference between two-way mirror foil and sun-protective foil silver?

Two-way mirror films reflect much stronger and hence only let 1% of daylight into the room. Although the film must be installed on the complete glass pane. If partially installed, the different temperatures on the glass could cause it to break.

After removing the protective foil, spray the window and film with a assembly concentrate/water mixture, then position the film on the window and after that, scrape out the moisture again.

In order to remove two-way mirror films, heat the film with a hair-dryer. Then pull the film from one of its corners. You can pull it longitudinally easily. After the old film is removed, spray Ajax window cleaner on the windows in order to remove the residuaries of the adhesive material. The remaining residuaries can also be removed with the help of a shaving razor or a glass scraper after a short time.