Sun-blocking film and window film with sun-blocking features for windows as pieces cut in the exact sizes, as pieces (in meters) you want or as rolls.

In summer the rooms you spend your time or work in can heat easily when sunlights get into your house and office. It is necessary to block the sunligthts effectively to be protected from high temperatures. Sun-blocking films not only help to lower ambient temperature they can also be used to prevent reflection and to block UV-rays. Window films are used in the sun-blocking systems as a good investment both for private life and professional life. In addition to their affordable prices, having multiple features is their greatest advantage. The films provide reliable protection from high temperatures, repel the sun-rays and can be applied on almost every glass surface easilty like vision-blocking films. However, you need to pay attention on some points to apply sun-blocking films with UV-blocking feature. There are several methods to apply sun-blocking films. They are relatively separated from each other essentially. We are pleased to provide you a consultancy service to make the films suitable for your needs thanks to our experience in the fields of window films and sun-blocking films for more than 30 years. 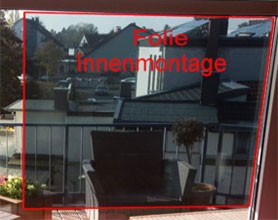 In addition to the affordable prices, having multiple features is the greatest advantage of our films.

Attention: Should sun-blocking films be applied from inside or outside of the windows?

It depends on the relevant window type. Sun-blocking films can be applied on the single-glazing windows depending on technical potential and personal desires. It does not matter to apply the films inside or outside of the windows.

However, you need to pay attention to the following issues:

We suggest the abovementioned application methods due to the different temperatures of the windows get into the rooms since application methods can cause the glasses to get broken. For instance, the gap between glasses in double-glazing windows can increase when films are applied from inside. The heat-blocking films can contribute to lower the temperature in the room by providing protection from sunlights. However, when the films are applied from inside the heat is transmitted directly to the glass, therefore it can be exposed to tension. In case temperature changes, tension also changes. If the window receives different tensions, those tensions can cause the glass to get broken. You can avoid this risk if you apply the films from outside. The film still provides protection against the sunlights. However, since the film is on the window, sunlights are insulated before they pass to glasses or they are absorbed. Therefore possible glass breakings are prevented. Window films which do not glare intensively like mirrors, do not absorb sunlights or reflect them are not of course affected from them. Attention: Despite the abovementioned effects, you can keep the rooms bright thanks to their light-transmissivity.

🕶️ What can you achieve with a sun protection film?

Depending on the strength, the sun protection film can lower the room temperature, thus improve the feeling of well-being and reduce the costs of air conditioning units. The stronger the film is, the higher the sun protection will be and the lesser light will come through (similar to sunglasses).

🌞 How does sun protection film work?

⏱ What is the durability of a sun protection film?

The durability of a sun protection film depends on indoor and outdoor installation, as well as vertical or horizontal installation. Depending on the type of film, our minimum warranty is between 3 and 10 years.

❓ When can a sun protection film be installed inside or outside?

✂️ How to install a sun protection film?

After removing the protective film, spray both window and film with the assembly concentrate/water mixture, then position the sun protection film on the glass and after that, scrape out the moisture again.

In order to remove a sun protection film, heat the foil with a hair-dryer. Then pull the foil from one of its corners. You can pull it longitudinally easily. After the old foil has been removed, spray Ajax window cleaner on the windows in order to remove the residuaries of the adhesive material. The remaining residuaries can also be removed with the help of a shaving razor or a glass scraper after a short time.